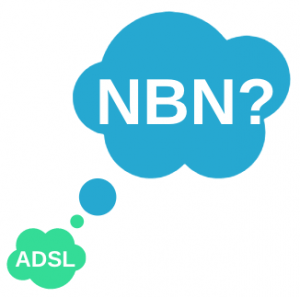 We hear this regularly – even from our friends and relatives who know we have lived and breathed nbn™ for 6 years! Even from our current ADSL clients whom we have been supporting for many years!

Before you say that line above, here are two things you really need to know:

Don’t get caught up with social media or other forum complaints.

There are usually a select few people on there:

A) ones comparing Australia to other countries. While it is good to compare and work towards, it is not useful degrading what we currently have.

B) the ones who like to complain…complain about their big Telco provider…but still stay with their big Telco providers who were the ones that neglected upgrading Australian infrastructure in the first place…meaning the government and nbn™ had to step in. The same ones with offshore support desks and the same ones with year on year contracts, leaving you little choice.

C) the ones who complain, but buy the slowest cheapest plan they can find. If they bought the fastest speed and from a provider with good reviews, then their complaints would be far more reliable and useful.

However if you don’t want to be one of those people complaining how bad the nbn™ is, then choose a higher speed tier such as 50/20  or the 100/40. Australia has some very cheap plans now, cheaper than other countries, so if you don’t expect to pay nothing and get everything, you will be in a far better position to benefit from what the nbn™ currently has to offer.

Even more reasons to switch to the nbn™ now…

(Saying all of the above, we do agree that Australians shouldn’t have been over-promised on the whole nbn™ rollout. We should have simply kept up with technology like most other countries. Yes the government had to step in and fill a gap the big providers had neglected, however we shouldn’t lose sight of it being an expensive and difficult solution to solve in one of the biggest countries in the world with one of the smallest populations.)

nbn™ is here right now, better than other options in Australia right now…it’s cheaper than ADSL, it’s faster than ADSL and it’s more reliable than ADSL.

It will continue to improve. So get on board and support it, which will ultimately help make it better.

Send us an email via our contact form including your exact address and we will check for nbn™ availability.

Be the first to know of new updates and special offers.

You have Successfully Subscribed!

Posted in News
← Data usage is rapidly on the rise. Is Unlimited the way to go?Bulk Emailing Services →

Has your modem been fried by lightning? If less than a year old, we'll replace one of our NewSprout supplied modems free of charge. Just another reason to use us.

Need help with your internet or web hosting? Get in touch with our expert team and we'll help any way we can.